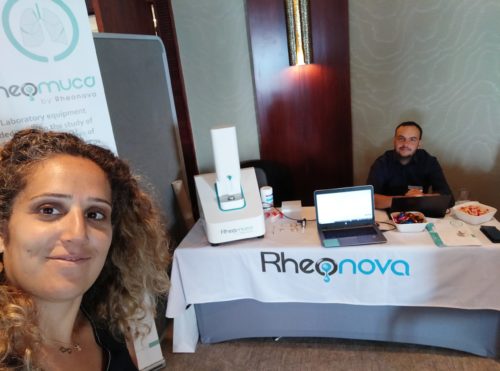 Rheonova participated in the Lung Invitro Event 2022 at the Hyatt Regency, Nice.

LIVe2022 intends to be a unique exchange platform for scientists interested in in vitro respiratory researches, stakeholders from academia, pharma, biotech, chemical, consumer goods, medical devices industries, CROs and regulatory agencies. The meeting Focused on predictive in vitro lung models designed for basic research, efficacy and toxicity testing. It aims to present the state-of-art of in vitro lung models, and to map out the route for its future development and use.

Mucus rheology is recognised as a key driver of bronchial obstruction in muco-obstructive diseases. However, the understanding of mucus transport mechanisms, as well as the development and characterisation of decongesting therapies, require model systems that are representative of the bronchial mucus, both biochemically and rheologically. Air-Liquid Interface (ALI) cultured epithelial cells produce mucus, with phenotype representative of several conditions (healthy, asthma, COPD, cystic fibrosis) and several depths within the airway tree (nose, bronchi). This mucus is collected for rheological analysis, and compared with sputum samples collected from patients.